Form Ratings: The Method Behind our Power Rankings
An explanation of the models we use to estimate the current form of PGA Tour players based on their playing history and how we use to them to make our power rankings.
By Jeremy Phillips 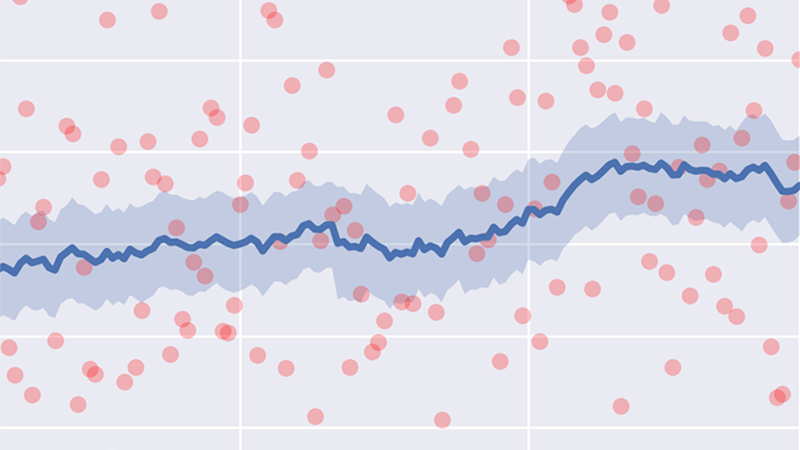 There's no doubt about it... golfers go in and out of form all the time. Anybody who has played the game can relate; you think you have it all figured out one month and are searching for it the next month. Professional golfers are faced with this same challenge. While their “bad” is still good, it's not uncommon for their scoring average to fluctuate a stroke or two here or there and this can lead to big fluctuations in outcomes over four-round tournaments.

Consider Phil Mickelson as an example. The chart below shows all his PGA Tour scores going back to January 2015. The black line is a 24-round moving average. 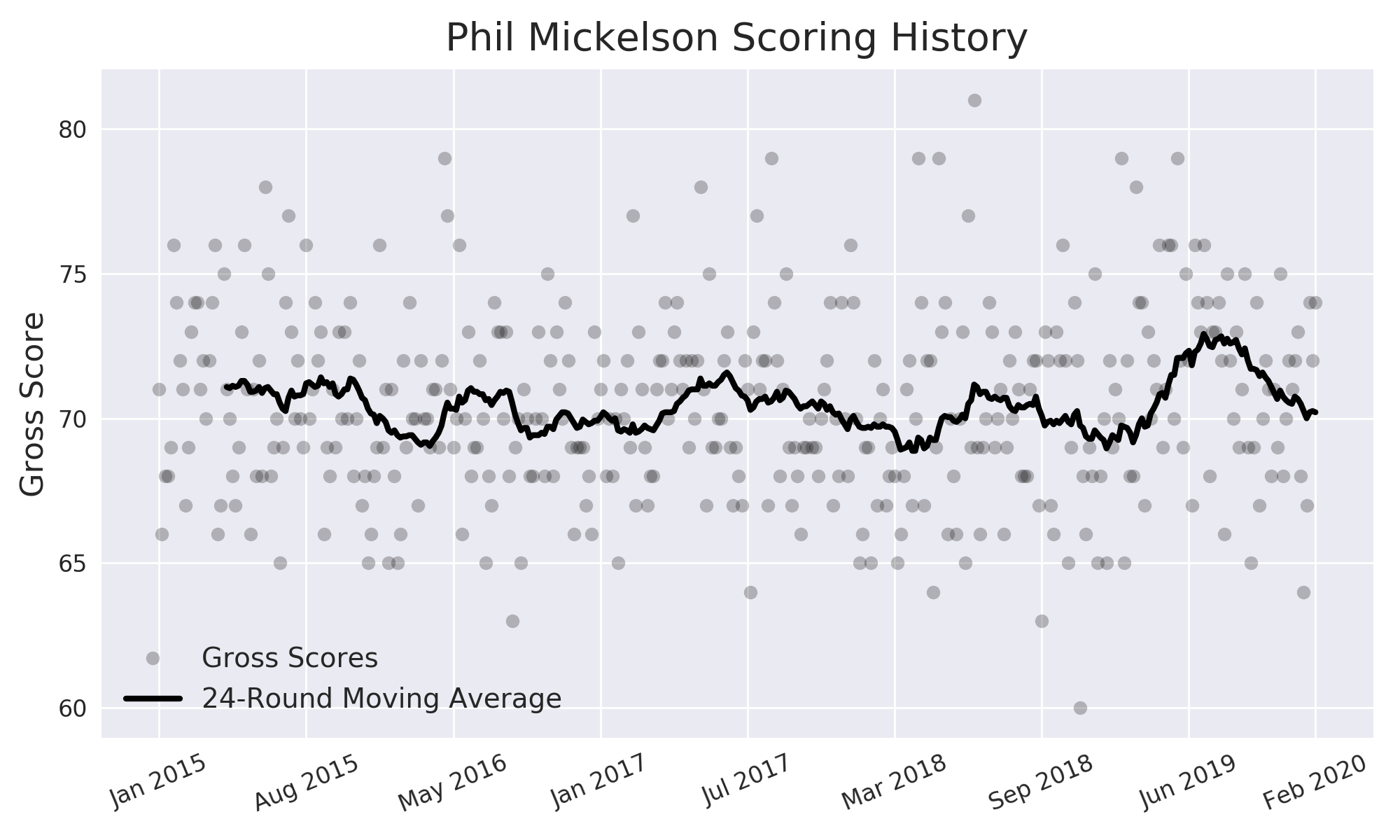 You can see from the chart that Mickelson’s scoring average hovered around 70 from 2015 through the end of 2018. He had some periods of lower scores and higher scores, but for the most part he was pretty steady. His average starting heading in the wrong direction near the end of 2019 peaking at nearly 73 before settling back down near 70 as of February of 2020.

While a moving average does a decent job of illustrating how Mickelson’s scoring average has evolved over time, it is a relatively naïve way to estimate form. Moving averages are susceptible to outliers and do not tell us anything about our relative uncertainty in where a player’s game is at any given point in time. Our Form Ratings model takes a more sophisticated approach to estimate a player’s form over time. The following lays out some concepts that motivate our model:

Understanding differences in scoring conditions from round to round is essential for estimating players’ form ratings. Consider two players with the same scoring average but suppose one of them has only played in low scoring events while the other has only played in high scoring events. It should follow that the player that played in only high scoring events is going to be the better player and we would expect that player to score better on average should these two players ever tee it up in the same tournament.

Our model controls for the scoring conditions from round to round by estimating round level adjustment factors. These adjustment factors are subtracted from the gross scores to compute adjusted scores which can then be compared directly across rounds and players.

We have these adjustment factors for all rounds in our database which includes rounds on the PGA Tour dating back to January 2015. Let’s take another look at Phil Mickelson’s scores by comparing them to his adjusted scores. The chart below shows how each gross score is adjusted to become an adjusted score. These adjusted scores can be compared across time and across players and give us a cleaner read on Mickelson’s performances over time. 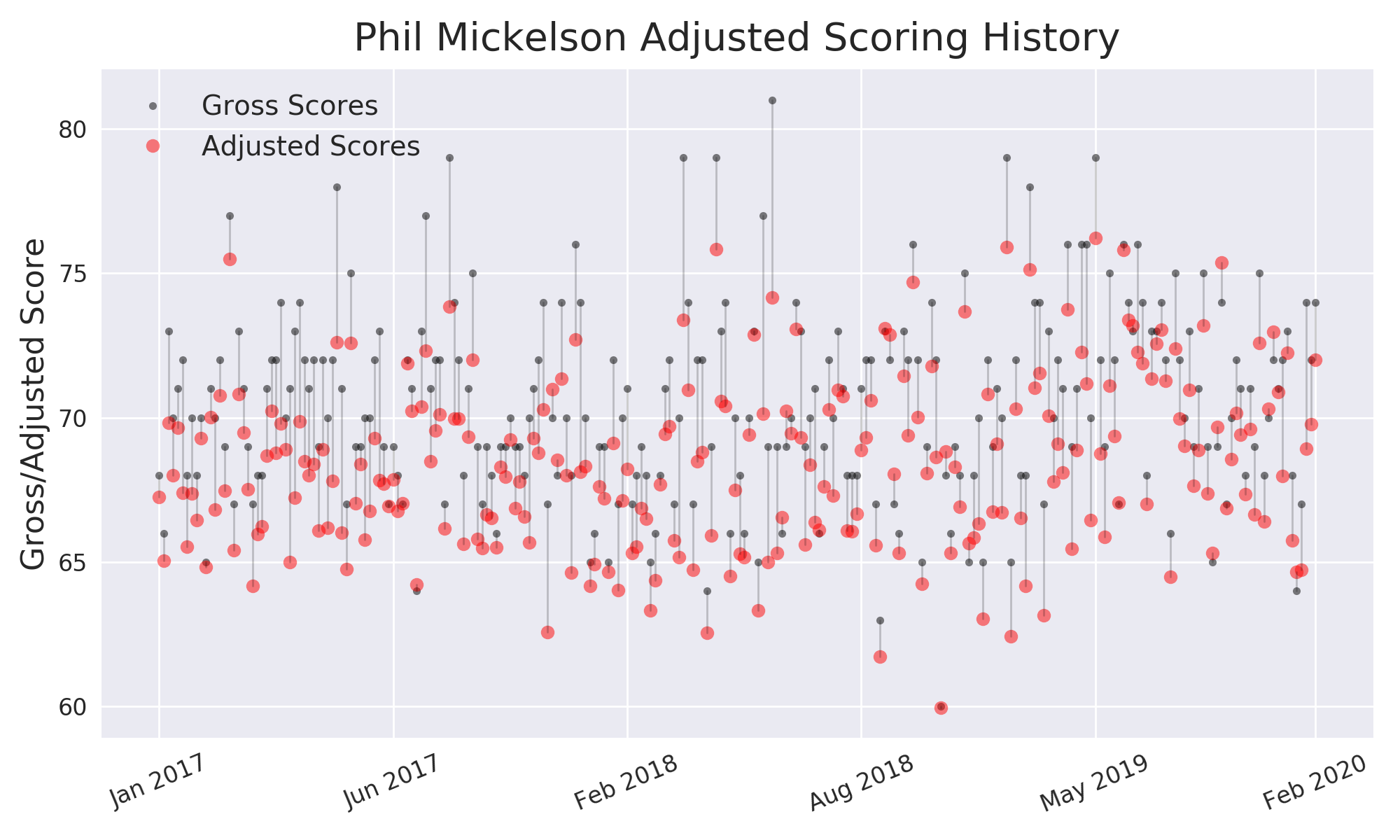 Since form rating is an estimate of skill, it is no surprise we see a higher percentage of scores in the 60-70 range from group one than we do group two. An interesting to take away, however, is that the distribution is quite wide for each group. 95% of the scores from group one fall between 63 and 75 which is a 12-stroke difference. When comparing group one’s distribution to group two’s distribution, we can see there is a lot of overlap. This means that even though a player from group one should be considered a favorite in a match against a player from group two, there is still a pretty good chance the player from group two will beat the player of group one. This is because of how much randomness there are in golf scores and it is important to account for this randomness or we risk overreacting and letting the noise destabilize our form ratings. 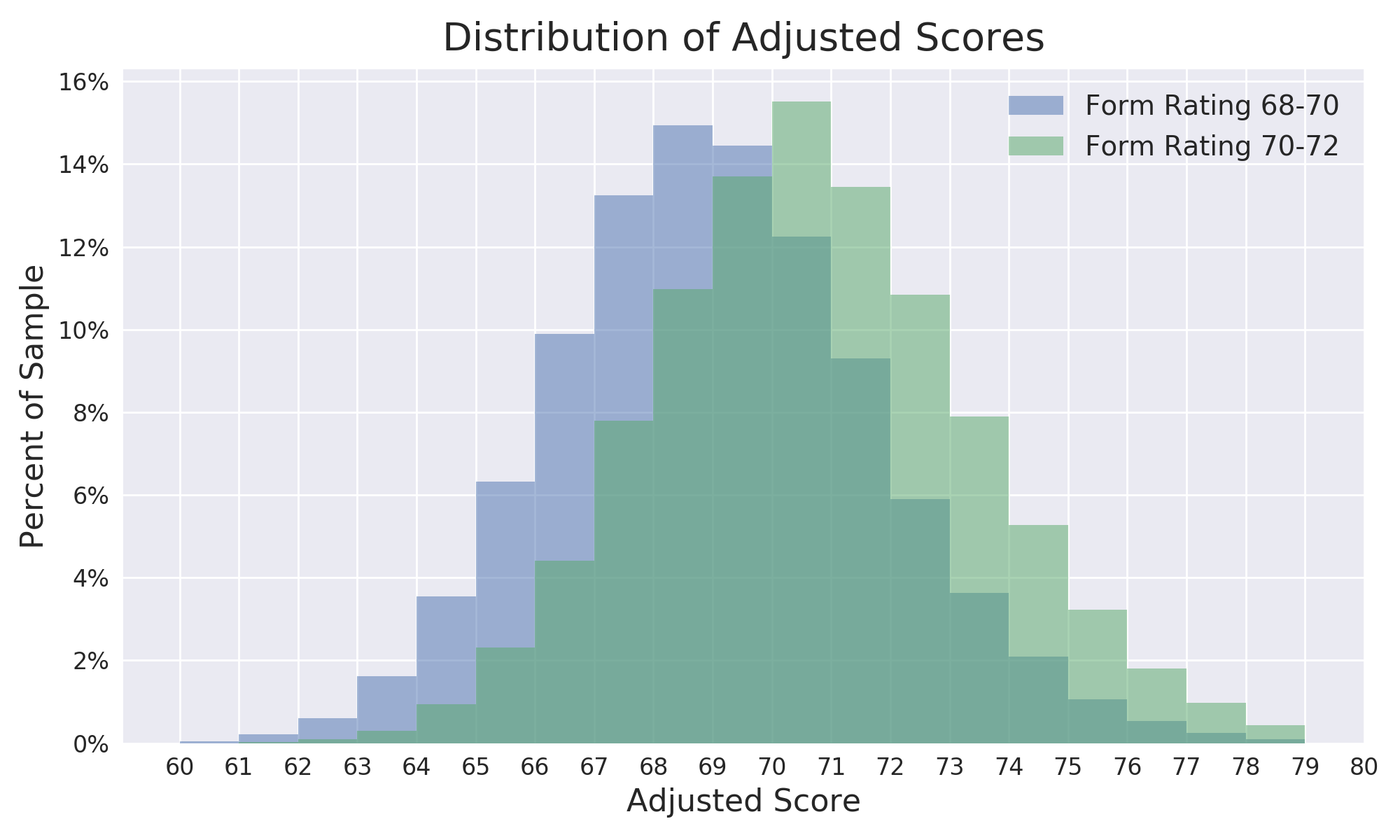 Seeing Through the Randomness 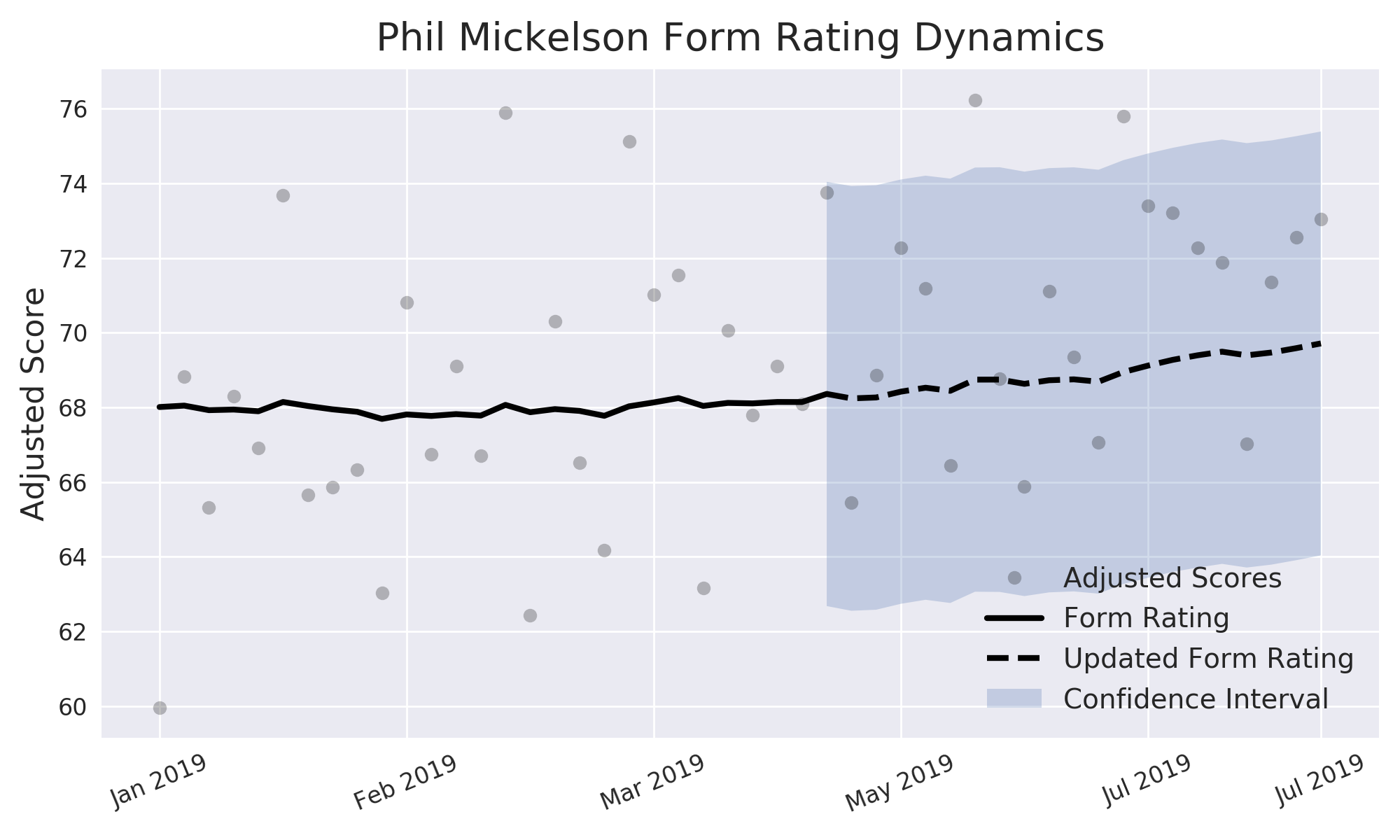 This is the basic mechanism by which our model adjusts player’s form ratings over time. Each time a player posts a new score we determine how likely observing such a score was given our previous estimate of their form rating. If the score seems out of line with our expectations, then our model will make the necessary adjustments to bring the form rating into better alignment with the new scores. You will notice that the model does not overreact to any one score. This is by design and is because the model knows the scores it sees will have a lot of noise.

Bringing it All Together

We began this article with a view of Phil Mickelson’s scoring history and computed a moving average to demonstrate how his performance had evolved over time. We are now able to provide a much more valuable perspective on Mickelson’s form. The chart below ties everything we talked about above together and show Mickelson’s form rating over time. 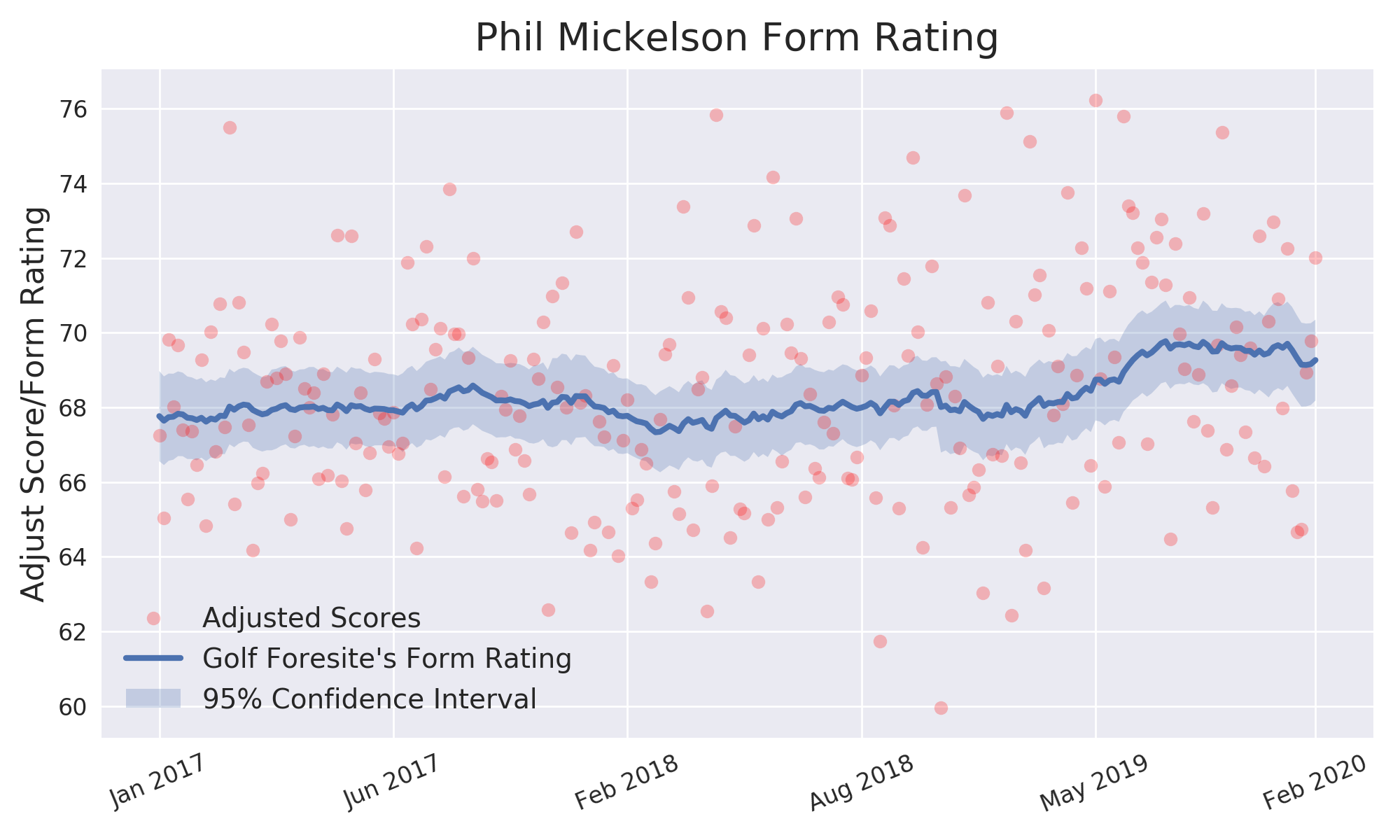 Our model estimates the historical and current form ratings for every player on the PGA Tour. The model is updated after every PGA Tour event and the results have several very useful applications.

The first application that we have already deployed on the site is using every player’s most recent form rating to rank order players based on how they score in our model. These results are summarized every week in our Power Rankings.