Watchlist: 2020 3M Open
The PGA Tour heads to the Twin Cities for the second annual 3M Open. Find out who we are keeping an eye on.
By Jeremy Phillips 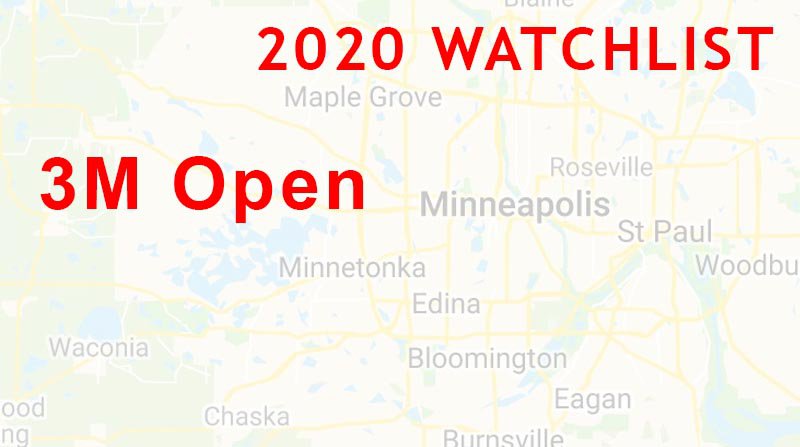 The double header in Dublin, Ohio is now behind us and the PGA Tour heads north to Minnesota for the 3M Open.

TPC Twin Cities was home to a PGA Tour Champions event (the 3M Championship) for 25 years before being added to the PGA Tour for the first time in 2019. With this being only the second playing of this event on the PGA Tour, our course history is sparse at best; just about half the field did not start in the tournament last year and we have no competitive history for them on the course.

The field is also unusually weak; not a single player ranked inside the top 16 in our power rankings has entered the tournament. Will it be a veteran that takes advantage of this opportunity or will we see a new winner on the PGA Tour this week? Here is who we are keeping an eye on this week:

Harris English has finished inside the top 20 in eight of his 13 starts on the PGA Tour in the 2020 season including in his two latest starts finishing T17 at the RBC Heritage and T13 in last week's Memorial. He's not a household name, but among the players in the field this week he is second in our power rankings. This is a good opportunity for English to break out.

Lucas Glover has played very steady in his five starts since the return. He made all five cuts and finished inside the top 25 in four out of five. Last week was his worst finish where he came in T38, but that was against a stacked field under very difficult playing conditions. He will not be up against as stiff of competition and he is returning to a venue where he finished tied for 7th last season.

Tony Finau has not done anything spectacular so far since the return from break, but finally popped up on the first page of the leaderboard in last week's Memorial for the first time since the Waste Management Open earlier this February. Finau has only one win on the PGA Tour and that was in the 2016 Puerto Rican Open which had a very soft field due to being played during the same week as the WGC-Dell Match Play. Despite a lack of winning, he does put himself into competition frequently finishing in the top 10 in 22% of his career starts. If Finau can build off of his momentum from last week, despite the poor final round performance, this could be a breakout week for him.

Brooks Koepka has not shown many signs that he his back in form other than a 7th place finish a few weeks back at the RBC Heritage. With that said, he is the class of the field. If he plays well this week he wins it for fun.

Will Gordon has not had many starts on the PGA Tour so far in his rookie season, but has done some things that should turn heads. Most recently, he finished in a tie for 3rd at the Travelers Championship and T21 at the Farmers Insurance Open, both of which had relatively strong fields. He has proven that he can go low when course conditions allow it and this could be a good spot for him to make a run.