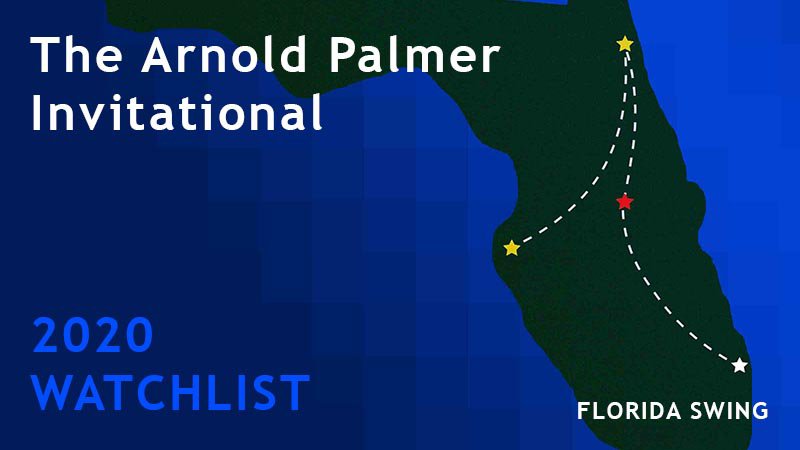 The PGA Tour heads to Bay Hill this week for the Arnold Palmer Invitational. This is a reduced field event of 121 players and features 13 of the top 20 players in our power rankings. We’ve crunched the numbers and believe the following players are worth keeping an eye on this week:

Rory McIlroy is currently number 1 in our power rankings and should be considered the favorite in most tournaments.  He is coming off of seven consecutive T5 or better finishes on the PGA Tour and always lurking within striking distance of the lead. In the last three years, he has a win, a T4 and a T6 in this event, so he knows the course and plays well there.

Bryson DeChambeau is coming into the event ranked 9th in our power rankings, up from 36th a month ago. He’s trending up and has a good track record at Bay Hill finishing in 2nd place two years ago behind Rory McIlroy.  Look for the Mad Scientist to be in contention this week.

Tommy Fleetwood had a good week last week despite rinsing it on the 72nd hole and blowing his chance to force a playoff. He’s been showing some signs of returning to the form we all remember him for having in 2018. He also finished tied for third in the event last year, so he knows a thing or two about Bay Hill.

Xander Schauffele is ranked fourth in our power rankings, the second highest ranked player in the field this week. One catch… this is his first start in the Arnold Palmer Invitational.

(Wildcard) Henrik Stenson is ranked 15th in our power rankings. He’s the 10th best player in the field based on our rankings and has a very solid track record at Bay Hill with four T5 or better finishes in the last seven years. We have not seen Stenson play on the PGA Tour since he won the Hero World Challenge three months ago. If he is looking to pick up where he left off, this is probably the best spot he could have chosen.