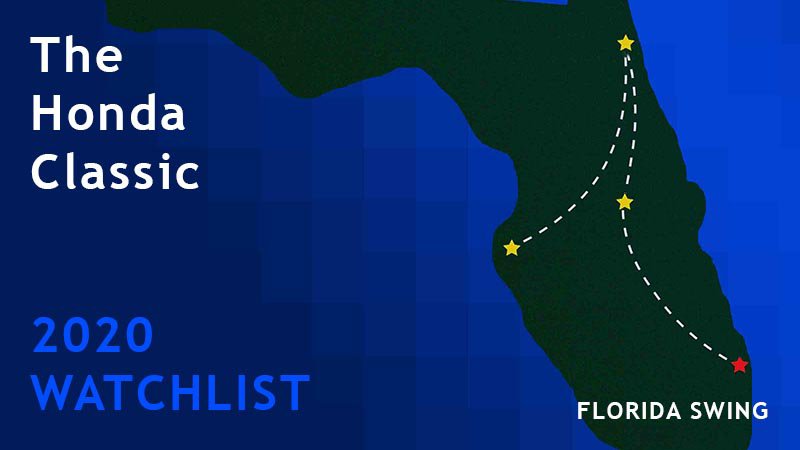 This week’s Honda Classic marks the beginning of the Florida swing for the PGA Tour. The par 70 Champion Course at PGA National is usually a tough test for players; it’s not a long course, but there is water lurking on nearly every hole.

The field is not particularly strong this week with many of the big names opting to take a week off before the Arnold Palmer Invitational and The Players Championship. We’ve crunched the numbers and believe the following players are worth keeping an eye on this week:

Rickie Fowler is currently 13th in our power rankings, the second highest ranked player in the field this week. He likes playing the Honda Classic and has had a lot of success there. He won the event in 2017 and finished tied for second last year to Keith Mitchell.

Billy Horschel has had five top 10 finishes so far in the 2019-2020 season. He’s currently ranked 32nd in our power rankings and has been trending in the right direction. He’s the 10th best ranked player in the field this week and has a history of over performing in this event.

Tommy Fleetwood played this event in 2018 and finished solo 4th. He’s one of the top ranked players in our power rankings coming into the event.

Byeong Hun “Ben” An is a solid player and ranks relatively high in our power rankings among the players in this field. He’s outperformed expectations in this event in the past and can be a factor if his game shows up this week.

(Wildcard) Wyndham Clark took to this course well last year with a T7 finish. He’s not particularly well ranked well in our power rankings, but if he can outperform like he did last year he is in a position to have his best finish of the season.