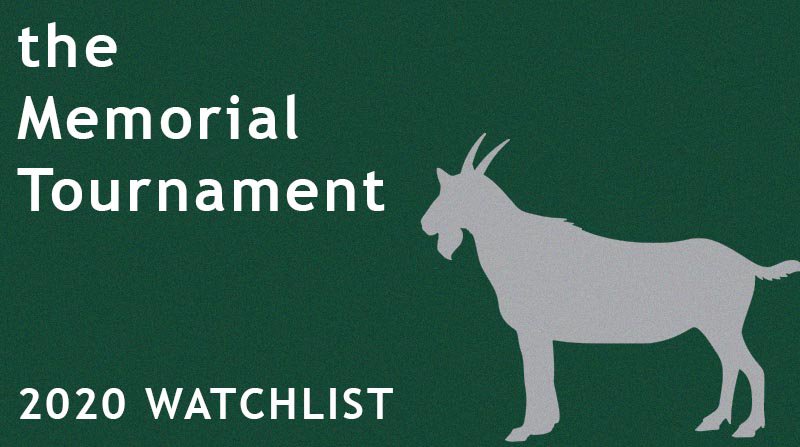 We struggled a bit with our watchlist for last week's Workday Charity Open, but did deliver two players, Patrick Cantlay and Kevin Streelman, that showed some interested in competing with their T7 finishes. Cantlay did not find his form until the final round on Sunday while Streelman got into the mix with a tournament best 64 on Friday, only to have a rather lackluster performance over the final two rounds. Colin Morikawa and Viktor Hovland led the field among first time players at Muirfield Village with Morikawa winning the event in a playoff against Justin Thomas and Hovland finishing in solo 3rd place.

This week the PGA Tour stays put in Dubln, Ohio for the second of two consecutive events at Muirfield Village. This time, however, Jack Nicklaus is calling the shots. The greens will be faster, the rough will be longer, the pin positions will be tougher, and the field will be deeper. Some key points to think about while making your selections this week:

Teeing it up this week are 44 of the top 50 players on the PGA Tour based on our power rankings; 17 more than we saw last week. Notable players joining the party include Rory McIlroy, Bryson DeChambeau, Webb Simpson, Daniel Berger, Abraham Ancer, Dustin Johnson, Paul Casey, and Tiger Woods. We would not be surprised to see several of these players in the mix come Sunday. With that said, here is who we are keeping an eye on this week:

Bryson DeChambeau is currently ranked 2nd in our power rankings, but clearly has the momentum heading into this week's event. In his last seven tournaments on the PGA Tour, Bryson has a 1st, 2nd, 3rd, 4th, 5th, 6th, and 8th place finish. He's played in the Memorial three times since 2016 with mixed results, but never missed a cut and won the event in 2018. It is hard to argue that he is not the favorite this week.

Patrick Cantlay is the defending champion at the Memorial and has had the rare opportunity to get in four competitive practice rounds last week to get him back in shape to defend his title. Tiger Woods is the only player to successfully defend his title at the Memorial when he won three in a row from 1999-2001. Cantlay is obviously no where near the level Tiger was during that time period, but he now has eight rounds under his belt since the return from the break and the 65 he fired in the fourth round of the Workday Charity Open is evidence that he has shaken all the rust off his game.

Justin Thomas has had mixed results at the Memorial missing the cut in three of his six starts at the event and finishing in 4th in 2017 and 8th in 2018. He lost last week in a playoff and has overall had a pretty successful, albeit inconsistent, 2020 season. Some bookmakers are considering Thomas to be the favorite this week. He very well may win, but he has also been missing cuts more often than some of the other top players in our power rankings this year. It is hard to know which Justin Thomas will show up this week or how he will respond mentally to the playoff loss.

Rory McIlroy has struggled a bit with consistency in the three tournaments he has played since the break. One may ask how he has held onto his number one spot in our power rankings despite not breaking the top 10 in any of those three events. The answer is relatively simple; he's had a lot of really good rounds. He's had enough good rounds to win, he just has had some bad ones lurking in there that have spoiled his chances. He has also showed signs of improvement and better consistency in each of the three events he has played. He has now had two weeks off and we suspect that he was able to pin point the areas of his game that were hindering his chances. We are looking for McIlroy to break through again this week. If not, there is a good chance he will lose his number one spot in our power rankings; a reality that we are sure keeps him up at night.

Tiger Woods is making his first official PGA start since the Genesis Invitational five months ago. We expect to see a lot of rust and some solid iron play. It is hard to consider him one of the favorites this week, but like most of the golf world, we will be closely watching to see the state of his game. Most critically, we are interested to see how healthy he looks, how he does on and around the greens, and if he is able to make the cut and get in four competitive rounds leading up to the PGA Championship which is only three weeks from now.