Watchlist: 2020 PGA Championship
The first major of the year is finally upon us. The PGA Championship is being held at TPC Harding Park in San Francisco, California. See who we are keeping an eye on.
By Jeremy Phillips 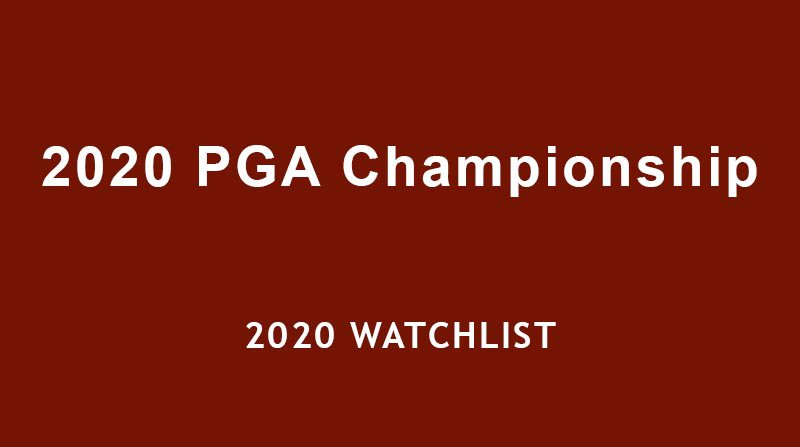 Usually at this point in the season we would already be throwing around names for player of the year. This year we are talking about the season's first major. This week the PGA Championship heads to the western United States for the first time in more than 20 years. TPC Harding Park has hosted  a few big golf events in the modern era; namely, the 2009 Presidents Cup and two World Golf Championship events, the 2006 WGC - American Express Championship and the 2015 WGC - Match Play Championship. This will be its first major championship and we are looking forward to see how it plays. At 7,251 yards, it's not the longest course on the rotation, but that doesn't mean it won't show it's teeth (e.g. Merion Country Club played less than 7,000 yards in the 2013 US Open and not a single player finished under par for the tournament).

Since there hasn't been a stroke play event at Harding Park since 2006, we do not have any usable course history. Our watchlist this week will be motivated primarily by current form, trends, and historical performance in majors. With that said, here is who we are keeping an eye on in this week's PGA Championship:

Xander Schauffele has played in 11 major championships since he made his major debut at the 2017 US Open. In those 11 starts, he has had five top ten finishes including two T2, a T3, a T5, and a T6. The rest of his starts resulted in top 50 finishes except for the 2017 PGA Championship where he missed the cut. He has played in six tournaments since the tour restart in June and finished in the top 20 in all of them except one. The guys is a player and has been threatening to win a major since he started playing in them. We are rooting for Schauffele to break through this week.

Brooks Koepka has struggled lately, but showed some signs of life last week with a T2 finish in the WGC - FedEx St. Jude Invitational. Face it, the guy has a hell of a resume when it comes to majors. We wouldn't be surprised to see him take down his third consecutive PGA Championship.

Patrick Reed has not done much since winning the WGC - Mexico Championship. He did have a T10 finish at the Memorial a few weeks ago in a very strong field on a very difficult course which is why we are bringing up here. The guy is a grinder and usually overperforms in majors. We wouldn't be surprised to see him in the mix on Sunday this week.

Viktor Hovland has never competed in a major championship as a professional. He played as an amateur in the 2019 Masters and 2019 US Open where he was low amateur and finished T32 and T12, respectively. Those are not bad outcomes for an amateur and we expect he will up his game in his first major start as a pro.

Tony Finau has been trending in the right direction lately with an 8th place finish at the Memorial and a T3 finish at the 3M Open. Though he has never won a major (or a main event on the PGA Tour for that matter), he seems to bring his best game to the big dance. Finau has had four top 10 finishes in his last five majors.