Watchlist: 2020 RBC Heritage
The PGA Tour is back in full swing with this week's RBC Heritage. Here is who we are keeping an eye on at Harbour Town.
By Jeremy Phillips 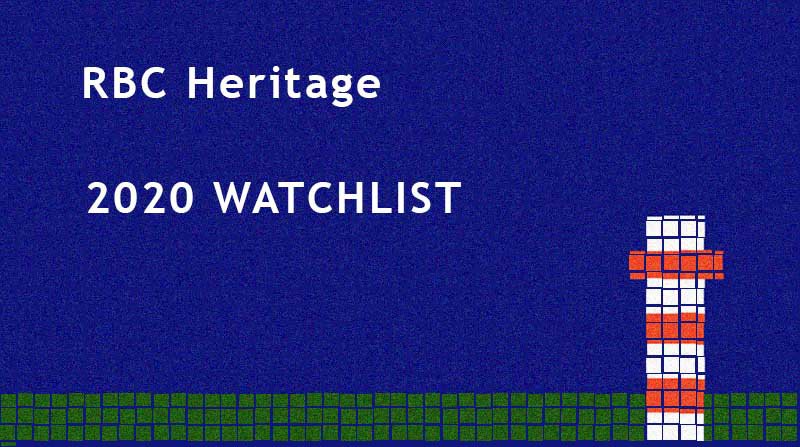 This week the PGA Tour features a full field of 152 players in Hilton Head, South Carolina, for the 2020 RBC Heritage.

Historically, Harbour Town has yielded success for some relatively lower tier players. In fact, none of the last four winners of the event are inside the top 100 of our power rankings. We see two primary reasons for this: 1) the tournament is traditionally played the week after the Masters and does not usually attract a lot of the top talent and 2) the course is relatively short at 7,100 yards which allows the short hitters to be much more competitive.

With respect to (1) above, this year is a remarkably different story. It's only the second tournament since the PGA Tour's return from hiatus and the top tier players are champing at the bit to sharpen their games before the invitationals, WGC events, and majors begin later this summer. All of the top five players and nine of the top ten players in our power rankings are in the field this week.

While uncertainty remains high until schedules normalize a bit more, last week did provide us some insight on players current forms. With that said, here is who we are keeping an eye on this week:

Bryson DeChambeau had a strong performance last week and held onto his 5th position in our power rankings. He has played in this tournament in each of the last four years with mixed results: two top five finishes and two missed cuts. This week he enters the tournament in the best form of his career and we expect to see him contend.

Joel Dahmen is ranked 35th in our power rankings, up five spots from the week before. He played in the event last year and finished in a tie for 16th place. At that time, he outperformed his rating by around 1.5 strokes per round. If he can repeat this over performance, he will be competition this week.

Matt Kuchar underperformed last week by failing to make the cut. He hasn't missed a cut at Harbour Town since 2003 and he's played there a lot. He's also had a 1st, 2nd, 5th, and 9th in the event since 2014.

Rory McIlroy looked sharp for the first three rounds of the Charles Schwab Challenge... and then he shot a six over par 41 on the front nine on Sunday. While one bad nine can ruin your top 5 streak, it doesn't ruin your status as the best player in the world. He should be considered the favorite to win this week.

Hideki Matsuyama is currently ranked 10th in our power rankings. He was playing pretty well before the break with a T5 finish at the Genesis Invitation and a T6 finish at the WCG Mexico Championship. He also shot a course record 63 in the first round and only round the Players Champsionship.