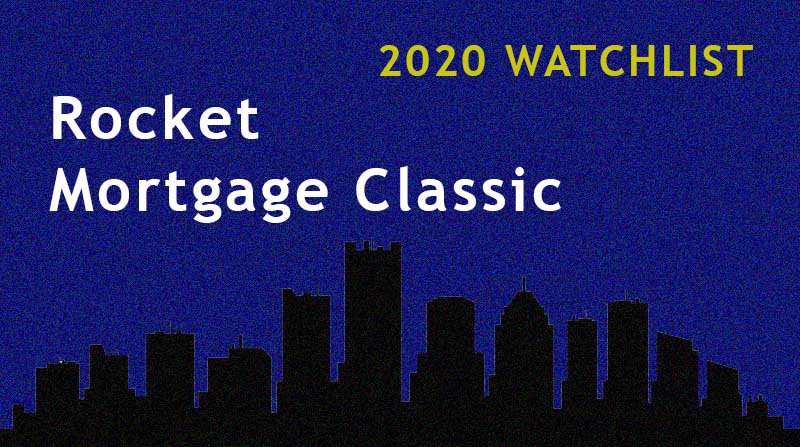 Trying to predict outcomes in these last few tournaments has presented a number of unique challenges:

In this week's 2020 Rocket Mortgage Classic we face a similar, but slightly different situation with respect to the three points above. First, we are starting to get a good sense of who is playing well and who is still searching for something. Second, this is only the second year of this event and the majority of the field has not competed at Detroit Golf Club in a PGA event before. Lastly, the field is not particularly strong compared to the last three weeks with only nine of the top 25 players in our power rankings entering the event.

With that said, we believe there are some clear favorites this week and also some notable underdogs worth taking a look at. Here is who we are keeping an eye on this week:

Bryson DeChambeau has continued to lurk near the top of the leaderboard. There's no denying that the Mad Scientist has found a successful formula. While did not compete in this event last year, he enters this contest has the third highest ranked player in our power rankings behind only Tyrell Hatton and Will Gordon, both of whom we have a low sample problem on (stay tuned for more about this issue).

Patrick Reed has shot in the 60's in seven out of the ten rounds since the restart. He's had some consistency problems, missing the cut at the RBC Heritage, but has held strong in the power rankings coming in this week ranked 12th overall and the sixth best in the field. He also played in Detroit last year and finished in a solo 5th place. We are looking for Reed to make a move this week.

Viktor Hovland has had three solid performances so far since the restart and is trending is a strong direction. We consider him to be one of the top young prospects on tour right now. He played in the event last season and finished in a tie for 13th place.

Tyrell Hatton is ranked number one in our power rankings. He's played very solid, though not as often as we would like to see. This week should give us a good indication of if he really is as good as our models think he is.

Will Gordon jumped up 88 spots in our power rankings to 3rd overall. This is almost certainly an overreaction by the model caused by a small sample issue (we only have 24 rounds on record for him on the PGA Tour), but his scores are trending in a seriously good direction. He now has had two solid performances for a newbie on Tour. The first was a T21 finish at the Farmers Insurance Open and the second was his 3rd place performance last week in the Travelers. We are interested in seeing how the young man does this week.