Watchlist: 2020 Workday Charity Open
This week the PGA Tour heads to Dublin, Ohio for the first of two consecutive events at Muirfield Village Golf Club. See which players we are keeping an eye on this week.
By Jeremy Phillips 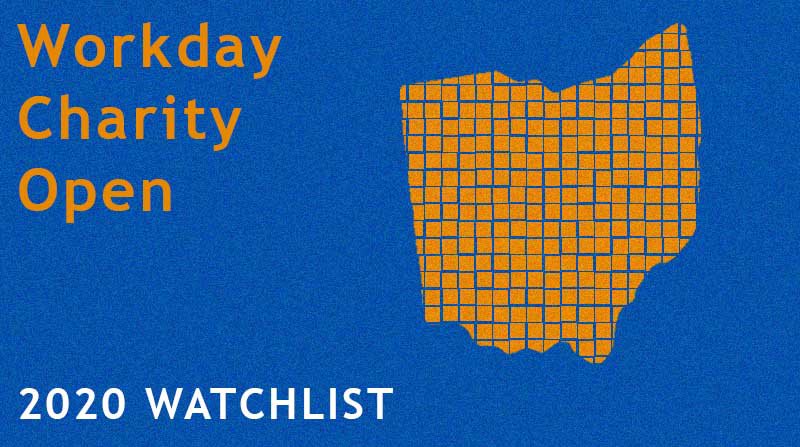 Our top pick last week, Bryson DeChambeau, came home to score in the 2020 Rocket Mortgage Classic. We did not really go out on a limb with that one. He was not a lock by any means, but he was the Vegas favorite and given how strong his performances were going into the event, combined with a relatively weaker field, it was no surprise to see him have a decisive victory.

This week the PGA Tour heads to Jack Nicklaus's Muirfield Village Golf Club in Dublin, Ohio for the 2020 Workday Charity Open. In these unique times we have a unique schedule situation where this is the first of two consecutive events being played at Muirfield Village with Jack's Memorial Tournament being rescheduled for next week. While these two events will be played at the same venue, there are a couple of reasons why the tournaments may look very different.

The field this week is not particularly strong with only 10 of the top 20 players in our power rankings playing and with the top three (McIlroy, DeChambeau, and Hatton) sitting out. All of our player history at Muirfield comes from the Memorial. Since the Memorial has a limited field and generally attracts only the top players, this week's weaker and larger field means we have some data gaps with respect to players' course histories. In fact, about a quarter of the field have not teed it up at Muirfield on the PGA Tour in the last 5 years.

With that said, we do not see any clear favorites this week, so we will go out on a bit more of a limb than we did last week. Here is who we are keeping an eye on at the 2020 Workday Charity Open:

Patrick Cantlay is currently ranked 7th in our power rankings. So far in the 2020 season, Cantlay has had three top five finishes in only seven starts. His only start since the break was three weeks ago at the RBC Heritage where he finished T11 in a relatively strong field. He won the Memorial last year and finished in 4th place in 2018, so he can obviously play well on this course. This is a great spot for Cantlay and we are sure he has high expectations this week.

Justin Rose is currently ranked 31st in our power rankings, but let's not forget the guy was number one in the world not too long ago. He's a class player. Rose has played in the Memorial 13 times since 2004 and has finished inside the top 10 more often than not including one win and two runner-ups. More recently, Rose has had two solid starts at the Charles Schwab Challenge where he finished T3 and at the RBC Heritage where he finished T14. He missed the cut at the Travelers after a poor second round, but generally appears like he has sorted out the problems he was facing before the break.

Kevin Streelman has played in the Memorial every year since 2009 with mixed results, but has had some success. Streelman completely lacks consistency, but plays exceptionally well when his game shows up. As evidence of this, in his last six starts Streelman has had three missed cuts and two second place finishes. Historically, Streelman has out performed his form rating at Muirfield Village by 1.9 strokes per round. Which Streelman will show up this week? Who knows, but if he is on his game he will win.

Marc Leishman also tends to lack consistency, but can win any tournament he enters. He has historically averaged 1.2 strokes better than his form rating at Muirfield Village. In the last five years he has had four top 15 finishes including two 5th place finishes in 2019 and 2015. The only tournament Leishman has played since the restart was at the Travelers where he had two solid opening rounds of 66 and 65 before faltering on the weekend. Prior to the break, Leishman was coming off of a victory at the Farmers Insurance Open and a second place finish at the Arnold Palmer Invitational.

Byeong Hun An (Ben An) has lacked consistency lately on the PGA Tour, but has the ability to lurk on a leaderboard from time to time. He has finished in the top 25 at the Memorial in each of the last four years with a 2nd place finish in 2018. He has out performed his form rating going into the Memorial by an average of 1.7 strokes per round. This could be a good spot for An.